Where We Are in the Cycle

In the fourth-quarter newsletter, we discussed how we think about long-term equity return expectations. The purpose of the article was to explain how fundamental returns (driven by earnings growth) and speculative returns (driven by changes in valuation) collectively impact market prices. While changes in valuation are the overwhelming driver of equity returns in the short run, earnings growth (a proxy for intrinsic value) is what truly matters over the long-term. As we showed last quarter, speculative returns have accounted for most of the increase in the S&P 500 over the past five years; looking forward, we know this can’t continue in perpetuity.

But that doesn’t mean it cannot persist for some time. Historically, higher starting valuations have had the impact one would expect: lower expected forward rates of return, particularly as the measurement period is extended (reducing the impact of short-term volatility). As a corollary, higher starting valuations (a different way of saying lower forecasted returns) increase the risk of deep drawdowns. 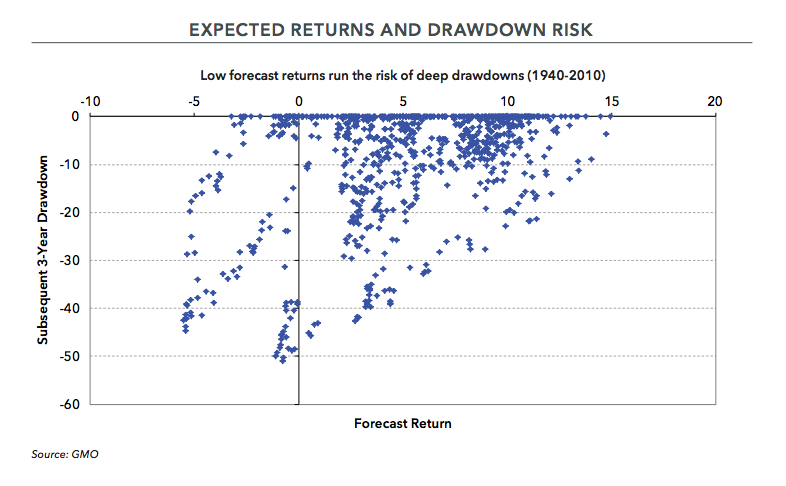 Consider the chart above (CAPE and Average Equity Returns), which shows subsequent rates of return in the stock market at different beginning CAPE ratios (a variation of the P/E ratio that normalizes earnings over several years to avoid the “noise” of a single data point). We can see that low valuations, like a CAPE ratio of five to fifteen times earnings, resulted in attractive outcomes: investors have averaged mid-teen returns (per year) over the next decade; in fact, there hasn’t been a single reported observation of negative returns (over the following ten years) from a starting CAPE of 15x or lower. Compare that to the other tail: historically, when the CAPE has exceeded 25x earnings, subsequent ten-year equity returns were negative more than a quarter of the time (with a mean return of 3.9% per year).

While that’s all as expected, you may notice something in the next chart (CAPE and Range of Ensuing Equity Returns) that seems surprising: even when stocks have been expensive – for example, a CAPE of 25x or higher – there are ten-year periods where equity returns were quite good (9.3% per year in the “best” observation). The idea valuations must revert to the mean over a five-year or ten-year period is not supported by historic data. That’s not to say valuation and average returns are uncorrelated (as we showed above, the data clearly supports this conclusion). It simply says that in any given period, relying on historic averages to build forward expectations is far from an exact science. For the prognosticator attempting to predict future changes in stock prices, this is a sobering realization. Market timers beware.

In case it sounds like we’re talking out of both sides of our mouths, let us be clear: we balance the thoughts we’ve previously shared on valuation against our belief that attempting to predict short-term market movements is a fool’s errand. As shown above, the “short-term” can last a long time. Our focus on the long-term is meshed with an appreciation for what’s happening in the here and now. We think Howard Marks of Oaktree Capital Management has the right idea:

So, where are we? We’ll look at three factors that give us a sense for where we stand in the current market cycle: equity valuations, investor sentiment, and broader economic data.

While we think continued P/E multiple expansion is hard to justify, there’s a legitimate argument that equity valuations are still in a “zone of reasonableness.” Current estimates for S&P 500 earnings in 2017 are around $130 per share; relative to current levels of ~2,350, the index trades for roughly 18x forward earnings. While that’s higher than the long-run average of 15x – 16x, there’s a reasonable argument to be made for a premium in the current interest rate environment (as Warren Buffett once noted, “interest rates act on asset values like gravity acts on physical matter”). Over the past fifty years, periods of historically high interest rates (like the 1970’s and early 1980’s) coincided with low market multiples (see chart below). We currently find ourselves at the other end of the spectrum: for example, the ten-year treasury yield (at a current yield of 2.4%) is well below historic averages (6.5%). Over the past half century, if you exclude periods with abnormally high interest rates (which we define as a ten-year treasury yield greater than 8%), the long-term average P/E multiple for the S&P 500 has been closer to 20x earnings. When nominal return expectations for bonds are falling, equities follow (moving higher to close the gap). 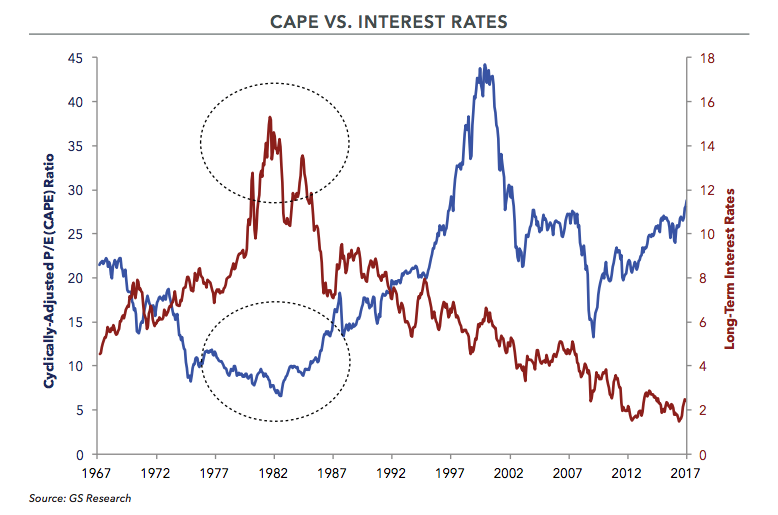 “If there has been a permanent drop of discount rates of perhaps 1.5 percentage points, then market prices are generally close enough to fair value that you can explain away the discrepancies as business as usual.”

Said differently, the discount rate used to value stocks is a function of interest rates; a permanent drop in interest rates – and as a corollary, discount rates – justifies higher asset prices (results in a higher present value of future cash flows). In this scenario, higher P/E’s are mathematically “correct,” assuming all else is equal. Years of low interest rates have influenced equity prices.

After the presidential election in November, we started seeing some signs of “animal spirits” in the market. But we think this is a relatively new phenomenon; in the aftermath of the Global Financial Crisis of 2008 / 2009, the current bull market has climbed a “wall of worry” for years. While there are some signs of complacency, we don’t see anything like the “story stocks” that were common in the late 1990’s tech bubble. Corporate activities that generally signal excesses (like mergers & acquisitions and initial public offerings) show few signs of froth. Our experience leads us to believe it’s premature to call this a bubble (as some have done for years). We do not think unrestrained optimism is present in the current environment.

The economic recovery has been characterized by a prolonged expansion with relatively weak GDP growth. In recent months, renewed optimism from business leaders and consumers alike has been promising. In the first quarter, the Business Roundtable CEO Economic Outlook Index reported its largest increase since the fourth quarter of 2009. In addition to plans for higher capital spending, the CEOs in the survey expect an increase in new hires and higher GDP growth over the coming year. CEOs in the survey were particularly optimistic about the potential for pro-growth policies under the new Administration – most notably tax and regulatory reforms. Renewed optimism hasn’t been confined to the C-suite: in March, consumer confidence in the United States surged to its highest level in more than sixteen years. Overall, recent economic data points to an economy on stable legs with room for continued improvement.

In the current environment, we don’t get the sense that the market is clinging to “fear” or “greed.” Rather, it seems likely that we’re somewhere closer to equilibrium. In this type of market environment, we think Howard Marks’ approach makes sense:

“It’s important to bear in mind that in addition to times when the errors are of commission (buying) and times when they are of omission (failing to buy), there are times when there’s no glaring error. When investor psychology is at an equilibrium, and fear and greed are balanced, asset prices are likely to be fair relative to value. In that case, there may be no compelling action – and it’s important to know that too. When there’s nothing particularly clever to do, the potential pitfall lies in insisting on being clever.”

While we’re happy to continue owning the companies we’re invested in, we are also cognizant that returns are likely to be lower over the next five to ten years than they’ve been over the past five years. Most asset classes seem priced for subnormal returns.

The natural inclination in this type of environment is to get “clever.” At the margin, this means stretching for returns in securities that are esoteric or outside of one’s comfort zone. If reinforced by positive results, it may lead well-meaning investors to abandon a sound investment strategy in pursuit of a “silver bullet.” In the end, these investors will end up learning a painful lesson.

We have no interest in abandoning a strategy that we’re confident will work over the long-term. Regardless of how widely markets swing (or how others react to those swings), we’ll stick to our knitting: globally diversified portfolios comprised of high-quality securities at reasonable prices.