The Path to Value Realization

For many years, we’ve heard market prognosticators proclaim that the current bull market is nearing its fateful end. Between the Euro crisis, the U.S. debt downgrade, concerns about China, Brexit, the “taper tantrum,” and now the threat of an expanding trade war, they have offered plenty of reasons to be cautious over the years since the financial crisis. And yet, with the benefit of hindsight, we can see that selling equities due to these fears would’ve been a mistake. 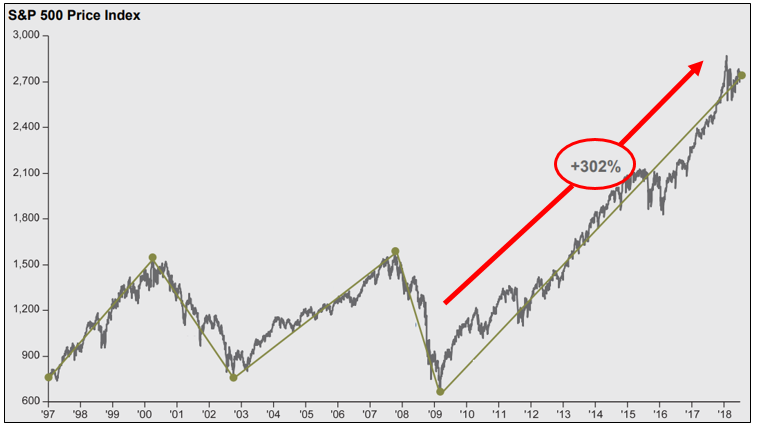 We made a similar point after the U.S. Presidential Election, when many assumed that a win for Trump (which they viewed as unlikely) would be a negative for the stock market. In this instance, they were wrong about what would happen and wrong about what it meant for equities. That is a perfect example of why we do not spend much time trying to predict macroeconomic or political developments and their short-term impact on markets.

Instead of focusing on what we believe is unknowable, we spend our time on decisions where we can add value for our clients.  As it relates to portfolio construction, that includes asset allocation (the mix between stocks and bonds in your portfolio) and the selection of individual securities or funds within those asset classes.

On asset allocation, we believe that the decision should be more structural than tactical. Said differently, we believe investors should focus on finding an allocation that’s appropriate given their ability and willingness to bear risk – and then they should stick to it. The alternative is to adjust your allocation by dancing in and out of stocks. As noted above, we think employing that strategy is a mistake that will negatively impact risk-adjusted returns over the long run.

The kind of companies (stocks) that we like to own have a few characteristics. First, we need to be able to understand the economics of the business. Second, we’re looking for sustainable competitive advantages that will enable the company to create shareholder value in the years and decades to come. Third, we look for companies with an opportunity to reinvest to support future growth. Finally, we want to partner with honest and able managers with financial interests that are aligned with shareholders. In summary, we’re looking for high-quality businesses run by good people at reasonable valuations.

Implicit in our investment decision is the assumption that there’s a disconnect between the price of the stock and the value of the business. By definition, an undervalued stock reflects an inefficiency in the market. When we invest, we do so under the belief that this inefficiency will be corrected over time. When that time will come is unclear. What we find is some investors really struggle with the idea that market inefficiency does not disappear simply because you own a stock. Warren Buffett touched on this during a speech at the University of Florida in 1998:

“The market knows nothing about my feelings. That is one of the first things you must learn about a stock. You buy 100 shares of General Motors (GM). Now suddenly you have this feeling about GM. It goes down, you may be mad at it. You may say, ‘Well, if it just goes up to what I paid for it, my life will be wonderful again.’ Or if it goes up, you may say how smart you were and how you and GM have this love affair. You have all these feelings. The stock doesn’t know you own it. The stock just sits there. It doesn’t care what you paid or the fact that you own it.”

This is an important concept to appreciate. When we buy a stock, we’ve completed in-depth research that leads us to conclude we’re acquiring an interest in a high-quality business at a reasonable valuation. We do so under the assumption that market prices will align with economic reality over the long run. We place as much value on Mr. Market’s opinions the day after we make an investment as we did the day before we made the investment. If our thesis is correct, it will eventually be reflected in the stock price. This requires patience. It also requires the conviction to accept periods of short-term volatility (namely unrealized losses) with equanimity.

Let’s look at an example to see how this works in practice. We’ve held 21st Century Fox in our individual equity portfolios for the past few years. We invested in the company because our research led us to believe that the stock price underappreciated the value of the business.

For a long time, the market didn’t seem to agree with our conclusion. But instead of reacting to short-term swings in the stock price, we focused our attention on the business. The company was meeting our expectations. For that reason, we thought the stock was still cheap (just like it was when we first invested). While we couldn’t pinpoint the catalyst, we thought the stock would eventually climb towards our fair value estimate. That moment came in late 2017, when The Walt Disney Company announced a deal to buy most of Fox for more than $50 billion. Fox, which had been stuck in the mid-$20’s per share, started climbing higher.

Since then, a lot has happened. In early June, following AT&T’s acquisition of Time Warner, Comcast announced an all cash bid for Fox worth $65 billion, or $35 per share – a nearly 20% premium to the Disney offer. A week later, Disney jockeyed back into the pole position with a $71.3 billion bid (~35% higher than their initial offer and ~10% higher than the Comcast bid).

Because of the bidding war, the share price for Fox has nearly doubled since November 2017.

We believe the pending transaction with Disney is attractive for Fox shareholders. The combined company should be able to effectively compete in a changing media landscape. Based on the current price, we think Disney (both the business and the stock) will do well in the coming years.

While we’re pleased with what has happened with Fox over the past nine months, the purpose of this article isn’t to single out a stock that has done well. We chose this timely example because it clearly shows how a perceived market inefficiency can quickly be corrected through M&A.

But that scenario isn’t particularly common, especially for the mid and large cap stocks that we tend to hold in client’s individual equity portfolios. When a company’s market cap is in the tens or hundreds of billions of dollars, being acquired is an infrequent source of value realization.

Usually the path to market efficiency is less abrupt. Change in market perception can take months or years to play out. That means dealing with long periods of noise (volatility). For that reason, investing requires a combination of patience and conviction. The latter must be rooted in  an investment process backed by in-depth research. Even then, mistakes happen. But if we stick to our process, we think it’s likely to generate productive results for clients over the long run.