Notes from the Investment Team

2017 was another banner year for investors. The total return (inclusive of dividends) for the S&P 500 was a gain of 22%. There were not any meaningful hiccups along the way; as shown in the chart below, the index posted positive returns in every single month of 2017. International stocks fared even better, with a total return for the MSCI All Country World Ex-U.S. index of 27%. 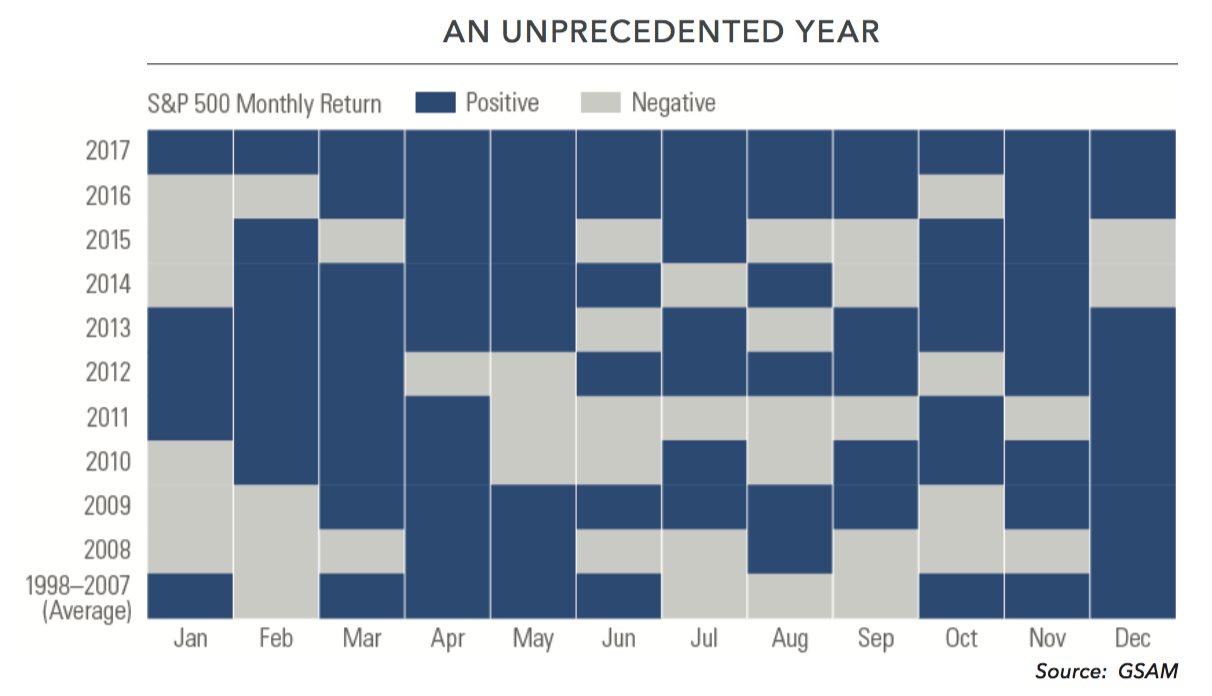 A strong year for stocks was capped off in December when Congress passed the largest U.S. tax overhaul in more than twenty-five years. The tax cut will put more money in consumers’ pockets and should drive incremental economic growth. Macroeconomic research firm Strategas estimates that this bill will add three-tenths of one percent to GDP growth in each of the next two years – a meaningful benefit relative to consensus GDP growth estimates of roughly 2.5%.

While the impact on corporations has garnered much attention, it turns out that three-quarters of the net tax cuts – roughly $1.1 trillion – will go to individual taxpayers over the next decade (corporations will receive a net tax cut of roughly $330 billion). In addition, most of the benefits to individuals are front-loaded, with roughly one-third to be realized in the next two years.

The benefits will be broadly felt: according to the Tax Policy Center, more than 80% of U.S. households will receive a tax cut in 2018 (averaging $900 – $1,000 for the middle 20% of households). The marginal propensity to consume for these households is quite high, meaning that much of the tax cut will find its way back into the economy. Considering that consumer spending accounts for ~70% of GDP, this could be a material driver of economic growth.

The average worker may also benefit from the knock-on effects of the tax cut. As an example, the unemployment rate is currently at 4.1%, the lowest level since the early 2000’s. If GDP growth materializes as expected, the unemployment rate could fall to its lowest level in fifty years. This further tightening of the labor market could result in a long-awaited acceleration in wage growth (average hourly earnings growth has been stuck around 2.0% – 2.5% for five years), putting more disposable income in the pockets of the average worker. This positive feedback loop could have a meaningful impact on GDP growth (for investors, it’s worth noting that this may lead to higher inflation and rising rates, which could ultimately pressure equity valuations).

At the corporate level, the most notable change from this bill is a significant and permanent reduction in the federal income tax rate (from 35% to 21%). In the past, we shared our opinion that corporate earnings growth was needed if the bull market was going to sustain itself. After flat results in 2015 and 2016, S&P 500 earnings increased nearly 10% in 2017 – the strongest growth rate for the index since 2011. With this tax bill, we should see an even better result in the coming year; consensus estimates assume that the lower effective tax rate will add roughly $10 per share to S&P 500 earnings, a primary driver of double-digit growth in 2018 (excluding the tax benefit, underlying earnings growth is expected to be in the mid to high single digits).

The impact on different industries (and even individual companies within a given industry) will vary. In many cases, it’s likely that the benefit of lower tax rates will be at least partially shared with consumers as excess returns are largely competed away. For businesses with sustainable competitive advantages, the benefits of the tax cut should largely accrue to owners in the form of higher after-tax earnings (which can be used for reinvestment or capital returns to shareholders).

In addition to a lower statutory tax rate, the bill enables 100% expensing of capital equipment purchases over the next five years. This change, which will improve the rate of return on capital expenditures (all else equal), should result in incremental business investment. As with many of these factors, the secondary effects of this investment will likely be beneficial for businesses and individuals alike.

Finally, the bill moves the U.S. to a territorial tax system, which will impact the treatment of international earnings. Corporations will no longer be incentivized to keep their foreign profits trapped overseas. Because of changes in the tax bill, S&P 500 companies will likely repatriate hundreds of billions of dollars in the coming months. It’s worth noting that many corporations have already effectively accessed these funds by borrowing against them; as a result, the direct impact on investment or capital returns to shareholders is difficult to estimate (for the companies we own for clients, we’re assuming the impact will be relatively minor). Even though the direct impact may not be large, we applaud changes that push companies to focus more on running their business and creating value for shareholders as opposed to playing games with the tax code.

Looking ahead to 2018, we remain focused on constructing globally diversified portfolios for clients with an asset allocation that aligns with their long-term financial objectives.

We’re encouraged by the investment returns achieved by clients in recent years. It’s been a wild ride over the decade since the end of 2007. Investors that maintained a steadfast commitment to a long-term investment strategy through thick and thin have been rewarded for their perseverance. On the other hand, those that have tried to dance in and out of the market have paid a steep price.

While we’re not agnostic on relative valuations, we tend to operate under the belief that you’re likely to do more harm than good by making significant changes in asset allocation. Ensuring that you’re prepared to weather inevitable bouts of market volatility is a more realistic goal than trying to avoid them entirely.

We’re at the point where the financial media inundates viewers and readers with predictions about the coming year. The reality is that the prognosticators have consistently shown an inability to correctly forecast the future, particularly when the outcomes are well outside of normal expectations (as an example, the average estimate from Wall Street was for the S&P 500 to increase by 11% in 2008; instead, the index declined by nearly 40% that year).

We operate under the belief that short-term swings in equity markets are unpredictable.

Because we’re not spending our time trying to guess the next tick, we are able to focus on what truly matters: finding securities that are reasonably valued relative to their long-term prospects. If we succeed on this front, we will generate satisfactory returns for our clients over the long run.