The S&P 500 reported its eighth consecutive year of positive returns in 2016, a feat last achieved in the 1990’s. That winning streak appeared in question in early November, with the S&P 500 up roughly 2% for the year. As the U.S. Presidential election approached, the consensus among market prognosticators was that a win for Hillary Clinton would mean a steady climb higher for the S&P 500; on the other hand, the uncertainty of Donald Trump would result in a swift move lower for equity markets (the world’s largest hedge-fund firm predicted an immediate decline of 10%).

When the votes were tallied on November 8th, Donald Trump emerged as the winner. On Tuesday night, as reality started to set in, futures markets around the globe moved sharply into the red, just as many had predicted (Dow futures were down more than 700 points at the lows). 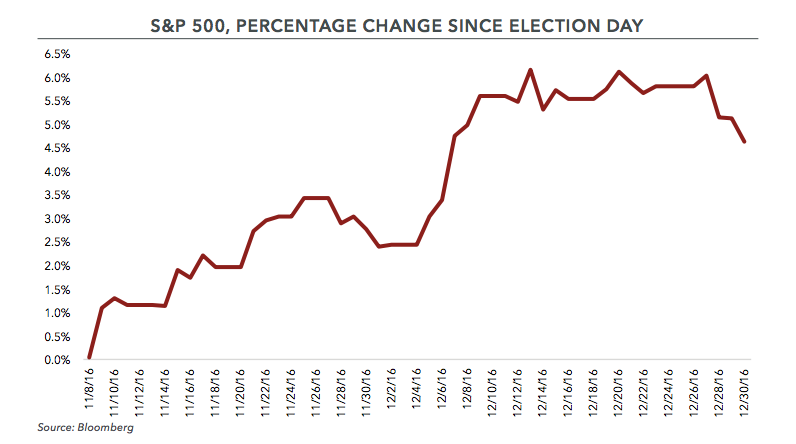 The market reaction to the U.S. Presidential election is another telling example of just how difficult it is to correctly predict short-term swings in the stock market – even if you can correctly predict how material events will transpire (as the election showed, that’s not easy to do either).

Another Year in the Green

Looking beyond the past twelve months, the years since the global financial crisis of 2008 have been quite kind to investors. Over the past eight years, the cumulative return for the S&P 500 has been 195%, or 14.5% per year (both measures include dividends).

Broadly speaking, market returns can be broken down into two buckets: fundamental returns, driven by dividends and earnings growth (the building blocks for calculating intrinsic value); and speculative or transitory returns, driven by the changing price-to-earnings (P/E) multiple investors are willing to pay for a dollar of earnings. Over the longterm, fundamentals matter most; but in the short-term, changes in Mr. Market’s mood can be the overwhelming driver of equity returns.

Since 1982, the S&P 500 has experienced ten cycles of P/E multiple expansion. The current cycle exceeds the historic median in terms of both duration and magnitude. Even compared to the other bull markets of the past thirty years, the current cycle has been an enjoyable outlier. When investing appears easy, economist Herbert Stein’s words are worth remembering: “If something cannot go on forever, it will stop.”

As we think about the years ahead, we can make rough estimates for each of our three variables (dividends, earnings, and the P/E for the S&P 500). The current dividend yield for the S&P 500 is roughly 2%. While the growth rate for corporate profits will vary from year to year, it’s likely to mirror the long-term growth rate of 6% – 7% per year over time. We’ll use a slightly wider range than the long-term average to account for short-term variability (call it 5% – 8% per year). Collectively, that leaves us with a fundamental return expectation of 7% – 10% per year(dividends plus earnings). Unsurprisingly, long-term market rates of return have been within this range.

Our final consideration is the P/E multiple. The long-term average multiple for the S&P 500 has been ~17x earnings. If we assume reversion to the mean by the end of our forecast period (the next five years), this reduces our return expectation by two and a half percentage points per year.

The output of this admittedly rudimentary forecast is forward equity returns of 4.5% to 7.5% per year. To put that in context, the S&P 500 has returned nearly 15% per year since 2011. It is quite unlikely that the joyful experience of the recent past will be repeated over the next five years.

To reiterate, returns since 2011 have been attributable to the following variables: 2.5% per year from dividends, 4.0% per year from earnings growth, and the remainder (8.0% per year) from a higher P/E multiple. Changes in the P/E, a huge tailwind to returns since 2011, are nevertheless temporary. If history is any guide, this benefit is likely to become a headwind at some point in the future: as shown in the table, the forward P/E for the S&P 500 is in the 85th percentile relative to its historic valuation. Simply put, equity returns cannot outpace growth in underlying corporate profits in perpetuity.

Because of the large gains in the stock market over the past five-plus years, future returns are likely to be less attractive. We continue to evaluate investment opportunities, but it has been more challenging to find bargains as prices have risen. Our efforts will eventually pay-off: when stocks inevitably hit a rough patch (like they did in the early months of 2016), we’ll be ready to act.

Mr. Market is in a good mood; as is often the case, prognosticators view his current optimism as reason to rejoice. A recent Barron’s article discussing the outlook for 2017 included the following:

“All ten strategists see stocks gaining more ground next year. Compare that with September, when only four of the group were bullish – and some forecasters thought the market would head south for the remainder of this year [they were wrong].”

Overwhelming optimism and higher valuations are rarely a combination for long-term success (that’s not to say the end is near: these conditions can persist for years, as we saw in the late 1990’s). When the crowd is singularly bullish or bearish, following along is rarely an effective investment strategy. Our view is that conservatism is appropriate when optimism abounds. In the words of Warren Buffett, “Be fearful when others are greedy and greedy when others are fearful.”

When markets only move in one direction (higher or lower), which has essentially been the case since early November, it’s important to stay level-headed. Investors cannot let short-term market activity dictate their actions.

Selling into a rising market is difficult. When there’s easy money to be made, conservatism gives way to “FOMO” (fear of missing out). When the focus of market participants shifts from business fundamentals to price action alone, investing becomes nothing more than speculating.

In the short-term, the market P/E can become untethered from historical averages. The anticipation of a Trump presidency has ignited some animal spirits in the market, which could push equity valuations even higher. It could also change the perceived value between asset classes, especially if higher interest rates continue to negatively impact the mark-to-market value of bond portfolios, encouraging investors to reallocate toward equities (as described in Malcolm’s article on page 1).

Regardless of where the stock market turns next, our focus for clients will continue to be owning high-quality businesses at reasonable prices. We will take advantage of opportunities when they’re presented to us (to buy or sell), and wait patiently otherwise.