Over the past few decades, student debt has transformed from a tool for accessing higher education to a significant obstacle preventing young people from accumulating wealth and saving towards retirement. According to a February 2017 report published by the Federal Reserve Bank of New York, outstanding student loan balances increased by $31 billion in 2016. This has resulted in a total student debt of $1.31 trillion, the highest level of student loans ever recorded in the United States. With the level of student debt increasing to record amounts, it is now more important than ever for borrowers to be aware of all their options so that they may be able to eliminate their debt in the most efficient manner possible. The quicker student debt can be eliminated, the quicker one can begin allocating his or her income towards their financial goals.

Student debt falls into one of two buckets: private loans or federal loans. It is important to distinguish between the two to better understand what repayment options are available for the borrower. Federal loans are loans that are issued by the federal government. Private loans are loans that are NOT issued by the federal government, and thus are not eligible for any of the federal loan repayment programs (more on that later). While there are various differences between private and federal loans, we will highlight the main differences below:

Private loans generally carry variable interest rates, which means that the rate can increase at any point and, as a result, increase the total amount that needs to be repaid to the lender. While the initial terms of the loan might offer an attractive low variable rate, the borrower must be cognizant to the potential risk of interest rates rising. There are a couple of ways to help minimize or even eliminate this risk. Some private lenders offer fixed rate loans. While the fixed rate will most likely be higher than a fixed rate on a federal loan, the borrower can have peace of mind knowing that the interest rate will never suddenly change. If an individual is already paying back private loans, an attractive option would be to refinance the loan at a lower rate. A borrower that has built up a good credit score over the years can take advantage of a lower fixed interest rate, which would result in big savings over the course of repaying the loan.

Unlike the realm of private loans, federal student loans have a wide variety of repayment choices available to the borrower. The two repayment plans that have the most overlap regarding loans that qualify for the plans are The Standard Repayment Plan (SRP) and the Income Based Repayment Plan (IBR). The SRP allows the borrower to repay outstanding student debt over a ten-year period with fixed monthly payments over the course of the repayment period. The IBR plan allows the borrower to pay the outstanding loan balance over a 20-year period, with monthly payments totaling 10% of the borrower’s discretionary income. Discretionary income is defined as the difference between your income and 150 percent of the poverty guideline for your family size and state of residence.

We will model out two cases: Scenario A and Scenario B. The base assumptions will remain identical for each scenario, with only the loan amount and the income of the borrower being adjusted. Our goal here is to demonstrate the financial impact on a borrower of the different loan repayment options. To ensure consistency across our projections, we have kept our assumptions in line with the assumptions the federal government uses in its “Repayment Estimator” tool located at studentloans.gov. 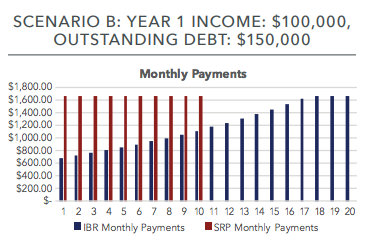 The Base Assumptions are:

In both scenarios A and B, the yearly total of loan expenditures under the SRP comes out to be about 20% of the incomes of borrowers A and B. Although the proportion of loan payments to income is nearly identical for both borrowers, it would be safe to assume that the 20% of income that borrower A would have to pay towards their student debt would have a higher likelihood of eating into money that would need to be allocated towards fixed living expenses than for borrower B. As a result, the IBR plan probably makes sense for borrower A. Borrower A would pay $137K over the lifetime of the IBR compared to the $106K he/she would pay under the SRP. Borrower A also benefits from loan forgiveness on the outstanding balance of $57K at the end of the borrowing period, and the tax liability for this is already included in the total expenditure figure for the IBR plan. Although this means that borrower A will pay more over the lifetime of the loan, the lower initial monthly payments under the IBR will allow the borrower to stretch out their limited dollars while also being able to tuck away funds for retirement accounts and other financial goals. The extra interest becomes the “opportunity cost” of allowing the borrower to have financial flexibility in their lowest earning years.

In scenario B, we see a similar picture as we do in Scenario A: an income which is dwarfed by the loan balance. However, borrower B has a much higher starting salary than in the previous scenario, and in theory should have more free dollars to budget for loan repayment. While borrower B can opt for lower monthly payments under the IBR, we can see why this would not be the smartest choice. Under the IBR, borrower B would be paying $285K over the repayment period, while only paying $200K on the SRP. This is a difference of $85K! The main explanation for this huge discrepancy is the difference in total interest paid (almost 100K more for the IBR) and the fact that there is minimal loan forgiveness. This demonstrates that while lower monthly payments might be attractive for borrower B, they would be making a costly financial mistake if he/she did not pay off their debt under the SRP. The significant interest expense under the IBR for high earners with high debt is a major factor which should be considered when choosing between repayment options. Although the borrower might have to budget and make some sacrifices to fulfill the higher monthly payment under the SRP, the extra $100K saved in interest could make a positive impact down the line whether it be for a down payment on a mortgage or contributions to a retirement account.

By being aware of their specific situation and the tradeoffs we have just discussed, borrowers of federal loans can make sound decisions in regard to paying off their debt. Eliminating student debt in an efficient way minimizes the crippling effect debt has on finances and can help borrowers look forward to beginning their journey towards amassing wealth.