Generation X—those born between 1965 and 1978—is known as the “401(k) generation.” They entered the workforce about the time that 401(k) plans were being introduced, and started their own retirement savings earlier than prior generations (the average age to start saving for retirement was 27). They highly value 401(k) plans as an important benefit, evidenced by the 84% participation rate by those who are offered a defined contribution plan by their employer. (Source: Generation X Workers, 15th Annual Transamerica Retirement Survey of Workers, August 2014.)

Next year, the first GenXers will turn 50. They will become eligible for full Social Security benefits at age 67, so they have a good 17 years left to save for retirement. The youngest of the GenXers will turn 37 next year, giving them a full 30 years to get ready for retirement. Many GenXers are hitting their higher earnings years, which gives them the opportunity to save more.

The Transamerica retirement survey reports that two-thirds of GenXers expect that their primary source of income in retirement will be their retirement account and other savings or investments, not Social Security. (The Social Security Trust Fund is forecasted to reach depletion in 2032, just one year after the first of the GenXers reaches full retirement age.)

GenXers estimate they will need to have saved $1 million by retirement (though 51% of those stated this was only a guess, not based on any analysis of their projected income/ expenses). The average (median) percentage of annual salaries deferred by those participating in a 401(k)or similar plan is 7%. The median total household retirement account savings for GenXers is currently $70,000. As the survey concludes, “they are behind on their savings, but they still have time to catch up.”

According to a May study from the Pew Charitable Trusts,the median family income for GenXers is about $71,100 (this compares to the U.S. Census Bureau estimate of the median family income for all households of $53,046). The questions that arise from this data are two-fold: 1) what will it take for Generation X workers to reach the $1 million goal?; and 2) is $1 million enough? I will point out that the relevance of this article is not limited to GenXers, as the observations and recommendations cross over to all generations.

What does it take to be a 401(k) millionaire? The answer depends on how much you’ve already saved, how much time you have, and how much you earn on your savings. For purposes of this discussion, we’ll use the median numbers for GenXers, and assume an annualized return of 7%.

If the “average” GenXer is among the youngest of the generation, the $1 million goal is more attainable with a more modest savings rate. We recommend that workers save 15% of their current income to their retirement account, every year of their working life. Assuming the young GenXer has already saved the median $70,000 and saves 15% of current earnings, the 37 year old earning themedian GenX income of $71,000 would be saving $10,650 a year. For the sake of simplicity, let’s ignore–for purposes of this illustration–inflation (price or wage) and assume the worker earns $71,000 a year for the next 30 years. With 7% returns, he/ she will have $1,538,865 in 30 years.

The power of compounding can’t be overstated. Those early years of saving are the most important.

Here are the key points that all generations can take from the illustrations thus far:

1. At a minimum, you need to be saving 15% of your current income to your retirement account;

2. The earlier you start saving, the better off you will be at retirement.

3. If you haven’t saved enough in the first part of your working life, 15% won’t do it (the recommended 15% minimum assumes an average of 15% over the course of an employee’s working life.) You’ve got to max out what the IRS allows, as well as take advantage of an employer match and other retirement accounts such as an IRA. You’ve got a lot of catching up to do.

Whether $1 million in retirement savings is enough depends on how much you spend, and what the purchasing power of that million dollars is at the time you retire. Again, let’s use the median numbers we have for GenXers. Recall that the median salary of GenXers is $71,000. Conventional wisdom says you will need to replace about 70% 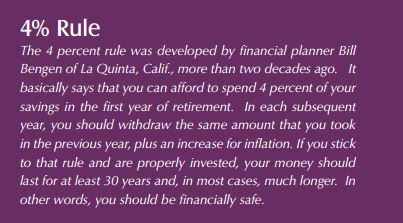 • In 40 years, you will need $2,791,865. Inflation also has a significant impact during retirement which needs to be factored in to your investment strategy. Returning to the $1 million example, let’s take a look at how the 4% rule works if you have $1 million in your retirement savings.

Here at The Fiduciary Group, we have illustrated what your withdrawals would be each year for 30 years, assuming you increase your withdrawals each year to account for inflation. The illustration shows that in order to retain the purchasing power of your $1 million, you must earn an average annualized return (net of fees) of 6.6%.

The big takeaways from the foregoing examples and illustrations are as follows:

1. If you think you need $1 million in retirement (which under the 4% rule would imply an annual income of $40,000 adjusted annually for inflation), you need to understand what the inflation-adjusted equivalent of that is in the year you plan to retire.

3. To maintain your purchasing power in retirement, you’ll need to earn an average of 6.6% returns after fees, which implies gross returns in the 7.5%-8% range. This makes sense, if you’re taking out 4% of account value adjusted by inflation, you need to earn 2.6% more than your 4% just to offset inflation. This really puts a whole new spin on allocation strategies in retirement. With stocks averaging 9% returns historically and bonds 5%, this implies an allocation strategy more heavily weighted to stocks. Especially if we face a long-duration bear market in bonds (returns below the historical average), in retirement you are going to have to have a significant portion invested in stocks.

Inflation is, in the words of Ronald Reagan, “as violent as a mugger, as frightening as an armed robber and as deadly as a hit man.” Think a million dollars is enough? Time to think again.