As part of our job as investment managers, we read numerous shareholder letters every year. Occasionally, these letters offer a unique perspective or insight that renews our enthusiasm for how we think about businesses and the art of long-term investing. The most recent letter from Amazon CEO Jeff Bezos is a gem that has kept our attention since it was published in April.

It’s important (for this discussion) that we delineate between the company and the stock price. While we understand the fascination with the stock, remember that it has been a bumpy ride. For example, Amazon stock fell more than 90% after the tech bubble (from a high of $106 per share in December 1999 to less than $6 per share in September 2001). Even as the company has matured and put itself on solid footing, annual stock price corrections of 30% or more have consistently occurred (see chart below). Staying on the roller coaster has been easier said than done. 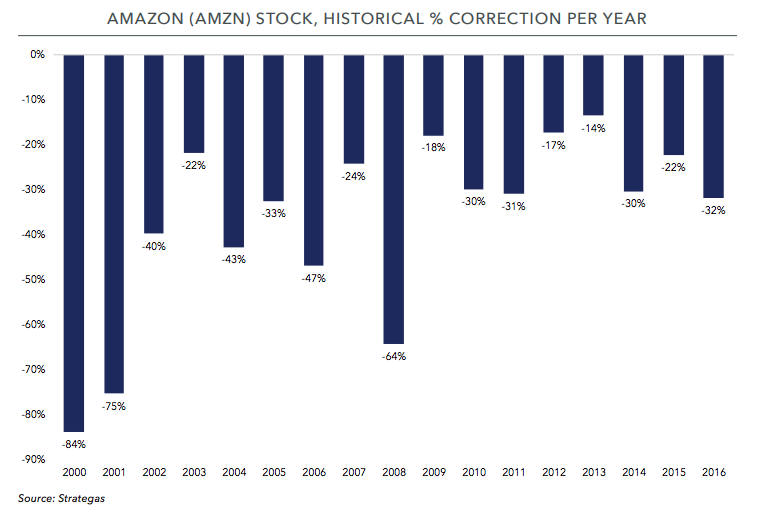 The experience of Amazon shareholders isn’t the focal point of this article. The stock price may be the headline – but it’s not where the true insights are derived. Bezos’ letter covers multiple facets – from corporate culture and the art of management to value creation and the importance of long-term thinking. In two decades, Amazon has grown from a start-up to one of the most valuable companies in the world. Its rise has been a wake-up call for a growing list of competitors, other businesses, and investors.

The premise of Bezos’ recent annual letter was to encapsulate what has worked for Amazon over the past two decades – and what it needs to do to ensure its continued success in the years to come. For Bezos, these two different states in a company’s lifecycle are “Day 1” and “Day 2”:

In the letter, Bezos outlines a “starter pack” that Amazon has used to make sure it’s still “Day 1”:

There’s considerable value in these ideas, particularly when they’re wrapped in long-term focus. Most public companies are living quarter to quarter. With a long-term perspective, companies end up playing a different game than competitors – and as a result, end up making different decisions. We’ll look at each of these ideas individually in hopes of getting a better sense for how they collectively impact strategic decision-making at Amazon.

“In business, we often find that the winning system goes almost ridiculously far in maximizing and or minimizing one or a few variables.”

This quote, from Charlie Munger, is a useful framework for thinking about how one of a kind businesses manage to differentiate themselves from the competition. From the beginning, Bezos has been singularly focused on optimizing a few variables that he expected to endure long-term:

“I very frequently get the question: ‘What’s going to change in the next 10 years?’ And that is a very interesting question; it’s a very common one. I almost never get the question: ‘What’s not going to change in the next 10 years?’ And I submit to you the second question is the more important of the two – because you can build a business strategy around the things that are stable in time. We know customers want low prices, and I know that’s going to be true ten years from now. They want fast delivery and vast selection… The effort we put into those things today will still be paying dividends for our customers ten years from now.”

Obsessing over ways to satisfy customers is central to Amazon’s ethos. We see a great example with free shipping, which Amazon tested for the first time in 2000. While the economics may have been tough to justify, surveys consistently showed – as they do today – that shipping costs are very important to customers (and a primary driver of abandoned “carts”). Unlike many competitors, Amazon actively addressed this early on. In 2005, Amazon took the next step forward with Prime, which gave members access to two-day “free” shipping. Amazon priced Prime at $79 per year even though every financial analysis they ran suggested it was crazy to do so. Bezos realized early that customers were receptive to forming relationships with emerging online brands. Building customer relationships that would last years—or even decades—was the real objective. Focusing solely on the impact on this year’s income statement would be mistake.

As an aside, outsized spending on customer acquisition isn’t a new idea. In the years prior to the tech bust, countless startups operated under the belief that large upfront “investments” (funded by VC’s or IPO’s) used to acquire new customers promised large payoffs at some point in the future. For many, that payoff never came. Many learned (all too late) that they were buying temporary loyalty. When the money stopped flowing and the discounts disappeared, customers bailed.

Amazon, on the other hand, was making a straight forward bet: the success of Prime came down to whether the value proposition was attractive for customers. Prime had to lay the groundwork for a true relationship, not a fling. The economics only worked if subscribers became long-term customers. In hindsight, we can see Prime has clearly achieved that goal: while the company stays quiet on the numbers, it’s estimated that Prime has eighty million subscribers with retention rates above 90% (comparable to Costco). Amazon has earned best in class customer loyalty by exceeding customer expectations. The outcome has been attractive economics for Amazon.

The negative impact of Prime on the P&L in the short-term shouldn’t be overlooked. It’s the type of “investment” many companies pass on. A study of 400 financial executives (“The Economic Implications of Corporate Financial Reporting”) found that most would avoid initiating a new project with attractive economics (positive NPV) if it meant missing the consensus earnings estimate. These CFO’s argue that financial market pressures encourage them to make decisions that sacrifice long-term value to meet quarterly targets. Companies that find themselves playing the Wall Street game of quarterly earnings will invariably make decisions that are not in owners’ interests. They will forgo risky “bets” with an uncertain outcome that take a long time to pay-off. The problem is these “bets” sow the seeds of future value creation. Shortsighted managers that are unwilling to invest (and fail) in the near-term set their organizations up for longterm decline (if they only plan to stick around a few more years, that’s a price they may be willing to “pay”).

The second component of the “Day 1 starter pack” may be the most difficult for large companies to implement.

“As companies get larger and more complex, there’s a tendency to manage to proxies… This can happen very easily in large organizations. The process becomes the proxy for the result you want. You stop looking at outcomes and just make sure you’re doing the process right. The process is not the thing. It’s always worth asking, do we own the process or does the process own us? In a Day 2 company, you might find it’s the second.”

In his letter, Bezos uses the example of customer surveys and other market research as a proxy for the actual customer. While these tools can play a helpful role in the decision-making process, they cannot replace the intuition and discretion required to understand the customer.

2,300% a year. That’s how quickly web usage was increasing in the Spring of 1994. This number astounded Bezos— “things just do not grow that fast.”  As shown in the chart below, the number of internet users in the United States more than doubled to nearly 13 million in 1994 (the difference between ~2,300% growth in usage and the increase in the number of users is explained by a significant increase in usage per user). The realization that the internet would change the world is what drove Bezos to start Amazon later that year. This early (and relentless) focus gave the company a critical advantage over established companies that waited many years before they sufficiently appreciated the disruptive potential of e-commerce to traditional retail. 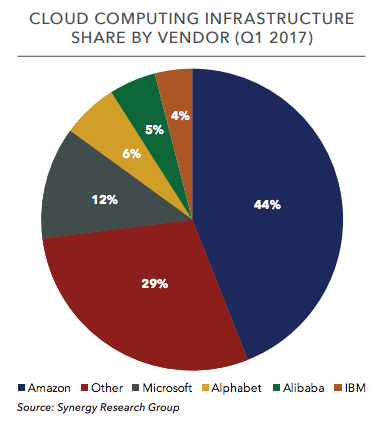 Amazingly, Amazon has played a similarly disruptive role with Amazon Web Services (AWS). Cloud computing, which is directly in the wheelhouse of IBM, Microsoft, and other IT service providers, was pioneered by Amazon in the early-mid 2000’s. Management realized that the tools and services they were developing for internal use had commercial applications. The tech stalwarts doubled-down on their mistake by sticking their heads in the sand and largely ignoring what Amazon was working on: AWS was essentially given a seven-year head start before others recognized the threat of cloud computing to their legacy businesses and responded. Despite some recent success, the damage still shows: in the first quarter of 2017, AWS held 44% market share of the global cloud computing (infrastructure) business – quadruple the share of the number two player (Microsoft). Being early has given Amazon a meaningful advantage. As Bezos noted in his shareholder letter:

“These big trends are not that hard to spot (they get talked and written about a lot), but they can be strangely hard for large organizations to embrace.”

Amazon commits significant resources to planting seeds despite knowing most won’t become trees. When results are discouraging, they recognize reality and correct course. Otherwise, they have the patience to continue investing and thinking long-term. You can only fail “successfully” if your company supports honest feedback, has realistic expectations, and maintains a long-term commitment to investing the necessary resources for bets that won’t pay off for years (if ever).

Bezos takes willingness to fail seriously: he trumpets Amazon’s “gigantic failures” in interviews. This is more than self-deprecation. He recognizes

“culture is created slowly over time… by the stories of past success and failure that become a deep part of the company lore.”

Encouraging experimentation – and even failure – is an important part of Amazon’s culture.

Marketing consultant Simon Sinek argues that companies like Amazon think, act, and communicate in a way that’s fundamentally different than most companies. Instead of focusing on what they do, they focus on why they do it. Why does your organization exist? For Amazon, the “Day 1 starter pack” helps ensure continued focus on its primary objective: to be “Earth’s most customer-centric company.” A recent survey from analytics firm ForeSee suggests it’s working: Amazon ranked first among the 100 largest retailers in overall customer satisfaction for the ninth consecutive year.

For Amazon, there’s a clear distinction between what they do and why they do it. What they do has changed over time: Amazon actively reinvents itself and is willing to cannibalize its own business if it means a better customer experience. The most notable example was the decision to list products from third-party sellers alongside Amazon’s own inventory, a decision that angered and mystified internal buyers. They were willing to change in a way that challenged their core business to improve the user experience. The point is that what they do is not who they are.

On the other hand, why they do it – their mission – is set in stone. Some companies lose sight of their purpose over time. Their goals are replaced by targeted outcomes (usually higher profits). The way Amazon looks at the world is foreign to these organizations. When you become more focused on what you’re doing than why you’re doing it, “Day 2” is on the horizon.

Capitalism is evolution. Companies that resist change will wither and die. Companies that won’t or can’t accept and embrace change in the world are in for some trouble. Studying Amazon and its competitors offers valuable lessons for identifying companies that will stand the test of time.