When public companies generate cash, they have a handful of options: park it in a bank account; reinvest in their business; acquire other companies; pay dividends; or repurchase their stock.

Among these avenues, share repurchases draw a disproportionate amount of attention. They are viewed skeptically as a form of financial engineering that is solely focused on short-term earnings management rather than investments that would benefit the company and society at large.

Considering how well the U.S. stock market has performed over the past decade, and particularly in comparison to roughly 2% annualized wage growth for American workers over this period, this topic has also become a political football in the run up to the U.S. Presidential Election in 2020. As is often the case when topics become politicized, well-reasoned arguments based on a careful analysis of the facts can end up playing second fiddle to catchy sound bites and political rhetoric.

For that reason, we thought it would be worthwhile to discuss this subject in some detail.

First, let’s start with the dynamics of a share repurchase. When a company engages in buybacks, they are exchanging one asset (cash) for another asset (a share of stock, which represents equity ownership in a business). The cash does not disappear. It is transferred to another party – in this case, a willing seller of the company’s stock. That seller will then be able to invest in a business, buy a house, or find another productive use from the sale proceeds. The company, which did not have an effective and intelligent use for the cash in its business, has transferred the capital to a willing seller who has a better use for those funds, less taxes collected by Uncle Sam (if the seller didn’t have a better use for the funds, they would not have sold the stock). When viewed this way, it becomes obvious that repurchases by their nature are not a misallocation of capital (as some claim).

Now let’s think about the rationale for share repurchases. As shareholders (the owners of the business), we want management to make investment decisions that are expected to increase the long-term per share value of the business. For the high-quality businesses that we desire to own, that likely means reinvesting, when possible, to grow their core (competitively advantaged) business. At times, it could also mean pursuing inorganic growth through mergers & acquisitions (M&A).

But sometimes, these avenues may lack compelling opportunities. When that occurs, a buyback can be a useful capital allocation tool. However, this comes with a caveat: repurchases should only be executed when they are expected to add value for the remaining shareholders. That condition is met when the business (stock) trades at a discount to its intrinsic value, conservatively calculated. Said differently, just like when we’re considering a potential investment in a business, a company should only repurchase its stock when they believe it is undervalued. Repurchases executed when the stock is overvalued negatively impact the per share intrinsic value of the company – and are ultimately reflected in its stock price.

Unfortunately, public companies do not have the best track record in terms of repurchase timing. We think that reflects the somewhat flawed approach often taken when returning capital to owners.

First, recognize that companies send signals that attract different types of investors. As Warren Buffett once said, “Either hold a rock concert, or a ballet, but don’t hold a rock concert and advertise it as a ballet.” Many companies that pay a dividend attempt to set their capital return policy such that they can (hopefully) pay a steadily increasing dividend over time. The decision to present themselves in this manner influences the shareholder base they attract – and in our opinion, can ultimately force management’s hand when it comes to capital allocation throughout the cycle.

We can see this is in the historic actions of companies (here we use the S&P 500 as a proxy). As shown below, even during difficult periods like the financial crisis of 2007 – 2009, companies were largely able to maintain their dividend payments to shareholders:

The problem is that boom and bust periods in the economy (which influences whether a company is overearning or underearning relative to normalized, full cycle profitability) are reflected in market prices. When a company is firing on all cylinders in a strong economy and generating excess cash relative to the long-term trend in earnings growth, the stock price responds accordingly.

In anticipation of the fact that this happy state of affairs may not endure indefinitely, companies will often let the dividend payout ratio trail lower during these periods. This means they will be left with the most excess cash flow – which funds share repurchases – when their stock is doing well. On the other hand, they are forced to pull back on repurchases when the company or the economy stumbles to help cover the dividend (or even ensure the financial stability of the business). Unsurprisingly, these are the times when the stock price is likely to be under pressure. We see this exact “boom and bust” mentality when looking at historic repurchase activity for S&P 500 companies: 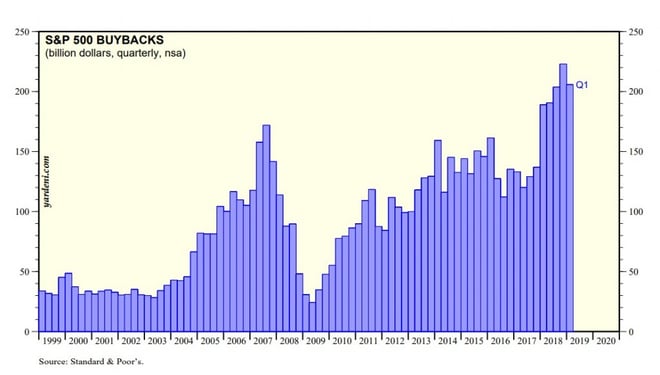 It’s an indictment on share repurchases that you can roughly eyeball when the market did well and when it did poorly over the past twenty years from that chart. The best times to invest in stocks were when companies stopped doing it. This suggests to us that the people in charge of public companies, generally speaking, may not have the ability to navigate the bouts of euphoria and despair in financial markets any more competently than the average investor.

Conclusion
At the end of the day, like any investment decision, the intelligence of a share repurchase comes down to the price paid relative to the (expected) value received. As Warren Buffett once put it, “Repurchases can be the dumbest thing in the world or the smartest thing in the world… I like it when we’re invested in companies where they understand that.”

We believe the companies we invest our clients’ assets in understand that dynamic. We think we own some of the few public companies run by managers who appreciate that an intelligent approach to repurchases can create material long-term value for shareholders. In scenarios where we do not believe management holds that belief, we are unlikely to be shareholders.

Interested in working with The Fiduciary Group? Please reach out to us to get started.