Coming Of Age During The Great Recession

The financial crisis and associated market volatility has caused a lot of people to lose confidence in the stock market. No group appears to have been more scarred by 2008, however, than the Millennials—the 21-36 year olds who “came of age” as investors over the last 10+ years. 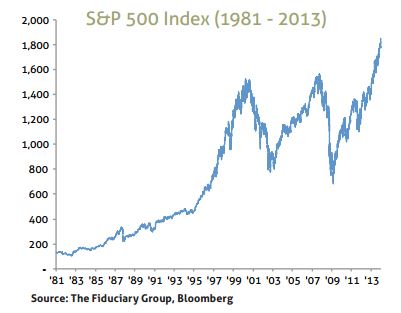 This chart tracks the S&P 500 index from 1981 through 2013. It’s easy to understand how someone who came of age in the time period on the left half of the chart might have a different mindset toward investing than someone who came of age during the years on the right half. The Baby Boomers’ investing mindset was developed largely in the 80’s and 90’s, when the markets enjoyed a relatively peaceful period of steady growth. Compare this to the volatility and steep market declines the Millennials have encountered. It’s easy to understand that if your first experience with the stock market (including the impact you saw it had on your parents’ retirement accounts and home values) was in the last 10+ years, it could leave you wary of the markets.

UBS released the results of its most recent survey of over 1600 affluent and high net worth investors, focus ing primarily on the sentiment and behaviors of Millennials compared to other generations. (UBS Investor Watch 1Q 2014). Millennials have a highly conservative mindset when it comes to investing—resembling that of the WWII generation who came of age during the Great Depression and who are now in retirement. The Millennials’ attitude toward investing was clearly affected by the Great Recession.

Another startling difference between Millennials and all other generations was their skepticism of long-term investing in the markets as a key to achieve financial success. When asked to select up to 3 of the most important factors to achieve financial success, only 28% picked “long-term investing” (in fact it rated as the second to last choice for Millennials of the 6 possible factors). By contrast, investing in the stock markets for the long term was the number one selection of 52% of non-Millennials.

Another study published recently by Fidelity reveals similar trends among younger generations. (Fidelity Profiles Investors on the Cusp of Becoming Millionaires, 01/15/14). The Millionaires of Tomorrow—those averaging $800,000 in total assets and an average household income of $150,000, half of whom are between the ages of 21 and 48—play it too safe when it comes to investing. Close to half reported that their investment strategy focused on reducing risk, minimizing loss, and avoiding market volatility. “Millionaires of Tomorrow may be missing the investor mentality to successfully increase their wealth,” Fidelity concluded.

Millennials appear to be savers, not investors. This will be a major challenge for this generation when it comes to building wealth. Savings alone won’t do it.

The way to build up an adequate retirement account is to achieve an average annualized rate of return in the area of 7-8% over the course of one’s working years. Consider the simple example of a young professional earning $100,000 per year who defers 10%–or $10,000 per year—into his or her retirement account. (For purposes of this simple illustration, we will not consider the impact of inflation.) After 40 years, if the account has earned nothing, the retiree will have a $400,000 balance. If the account had been invested conservatively, earning 3% on average, the account will have roughly a $750,000 balance. Only by investing in a reasonable long-term growth strategy— perhaps aggressive growth early on, tampering back the risk to a more moderate strategy by the time of retirement, and earning 7% on average over the longterm—will the account have a balance of $2 million (an 8% annualized return would result in a $2.6 million account). Referring back to our 4% rule of thumb for withdrawals—(the rule being that in retirement, you should limit average annual withdrawals to 4% of the account value, which is what a moderately conservative account could reasonably be expected to earn on average)—at $2 million in assets, the retiree would receive $80,000 of annual income, enough to replace 80% of the retiree’s prior income. If the account had only earned 3% on average during those 40 years, the $750,000 balance would only provide $30,000 of annual income—clearly insufficient to replace prior earnings and maintain the retiree’s standard of living.

If it’s clear that the goal of Millennials should be to earn an average annualized return of 7% over the long term in order to build a sufficient retirement account, how should the account be invested?

The most accessible way for Millennials to achieve rates of return of 7-8% over the long term is to invest heavily in stocks. Contrary to the prevailing opinion of Millennials, “investing in the markets for the long term” is not just a factor, but THE KEY to achieving financial success (of course this assumes hard work and saving sufficiently). Even if you work hard and save but don’t invest, you won’t get there.

Over history, stocks have earned on average just over 9% in nominal returns. After considering the effects of inflation, that’s a historical real return of over 6%. Bonds have returned a nominal return of about 5% historically, with a real (inflation-adjusted) return of less than 2%. Cash has returned only a 3% nominal return, but after factoring in inflation, cash has delivered less than one-half of one percent in today’s dollars! A portfolio comprised largely of cash won’t fund your retirement.

In the UBS study, Millennials defined “risk”—what they sought to avoid— as “permanent risk of loss.” This is probably the heart of the problem: mistaking normal market volatility for permanent risk of loss. If we know that historically, stocks return about 9% in nominal terms–provided you stay invested in the market for the long term—how can those who are wary of the markets because of short-term volatility get more comfortable investing in the markets over the long-term?

Lengthening one’s perspective is the first step. Instead of concentrating on short-term annual returns, step back and take a look at rolling 5-year returns (the returns a stock investor averages during the preceding 5 years). In the chart below, the blue line represents the rolling 5-year annualized returns, and the red line represents the annual returns of the S&P 500. During the turbulence of the last decade, investors experienced slightly negative returns (less than about -2%) on a 5-year annualized basis in only a couple of periods. If you focused on performance only on an annual basis, the frequency and magnitude of loss would feel much more extreme. Just by expanding the horizon from one year to five years, the magnitude and frequency of the “temporary” annual losses were significantly decreased.

Now let’s expand the horizon to 10 years, which is an appropriate frame of reference for long-term investors. On a 10-year basis, investors only experienced a slightly negative (less than 2%) loss on average during one period over the last 20 years, in 2008-09. Despite multiple, severe pullbacks in the market over the last 20 years, when the returns are annualized over 10 years (taking the average of the gains and the losses), the markets have delivered mostly positive annualized returns in the average range of 8-10%. Investors who were invested in the S&P 500 over the last 10 years (rebalancing after periods of market pullback) averaged a 7.4% annualized return for each of those 10 years, despite the significant market decline of over -50% from peak to trough during the financial crisis. This is clear and persuasive evidence that the volatility one experienced during this time did not amount to permanent loss of capital.

As a final frame of reference, from 1937 until 2013, despite negative annual returns in just over a quarter of the years, the S&P 500 has returned negative 10-year annualized returns on only two occasions—the years following the Great Depression, and the years following the financial crisis and Great Recession—and those negative 10-year annualized returns were only down about -2%.

Here’s the big takeaway from us here at the The Fiduciary Group for the Millennials who were put off by the volatility of the markets over the last decade, and as a result, are (1) extremely conservative in their asset allocation, and (2) think that long-term investing is not a key to building wealth: what you have experienced is short-term volatility, not permanent loss of capital. Get used to it. That’s how the markets work. When you stay invested in the markets, you don’t have permanent loss of capital unless fear causes you to sell out at the bottom. When you are invested in stocks, you have a risk of volatility in portfolio valuation. Stay invested. Give your stock portfolio the opportunity to earn the long-term annualized returns in the range of 8-10% which we know it historically has earned.

Want to moderate your risk? Throw in some fixed income—maybe 10-20% early on, increasing over time to 30-40% by the time you’re nearing retirement. But it is not prudent to weight half of your portfolio in cash—what Millennials appear to be doing currently— in order to reduce risk, minimize loss, and avoid market volatility. The bigger risk is that you won’t grow your account sufficiently to be able to retire and maintain your lifestyle.

Work hard, yes! Save a lot, yes! But by all means, embrace long-term investing in stocks as a critical component of building your wealth. Don’t lose sight of the big picture—keep a long-term perspective, maintain an appropriate balance of stocks and bonds in your portfolio, and diversify within and among asset classes to reduce the risk of loss. These are some of the keys to financial success.