In the second quarter newsletter, we noted there were more than $10 trillion of negative-yielding bonds around the world. While U.S. Treasury bonds are not in that group, they are pretty close: the 10-year Treasury currently yields 1.6%, compared to an average of 6.5% over the past 50 years. 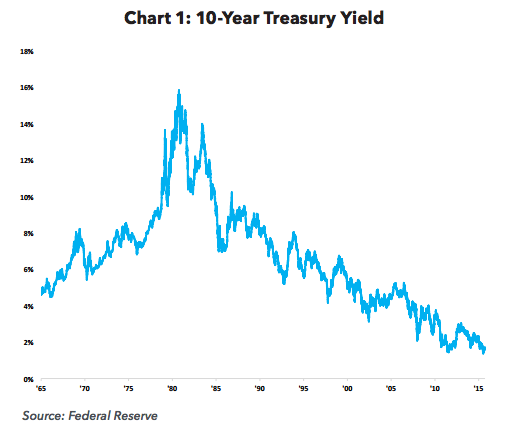 This period of low nominal interest rates has been particularly noticeable for retirees, who have spent decades saving money for retirement under the assumption that they could live off of the income generated by high-quality corporate and government bonds.

Today, that math does not work. The current state of affairs has driven a search for yield outside of high-quality bonds. One way investors have tried to offset paltry bond yields in recent years has been dividend-paying stocks. Through the first nine months of 2016, the top performing sectors in the S&P 500 have been Telecommunications and Utilities – both of which have a materially higher dividend yield than the broader stock market.

In addition to outperformance through the first nine months of 2016, equities that act as bond proxies have done well for some time: the S&P 500 Utilities index, for example, has reported nearly 14% annualized returns over the past three years, compared to 11% for the S&P 500 Index (9/30/16).

As we will discuss in a moment, the gains in the Utilities index have largely been driven by valuation, not an improvement in underlying business fundamentals. Said differently, reaching for yield has been an effective strategy as of late (whether or not it will continue to work is to be seen).

Even when we look broadly, stocks hold promise for investors searching for yield: the current dividend yield for the S&P 500 Index, at 2.1%, is quite a bit higher than the yield on the 10-year Treasury bond. Importantly, unlike the static coupon from the bond, stock dividends are likely to increase over time (over the past decade, which includes a significant

reduction during the financial crisis, the per share dividend for the S&P 500 Index increased 6% per year). On this cursory glance, equities appear to be a reasonably attractive substitute for fixed income securities (particularly for the long-term investor that is capable of dealing with periodic bouts of volatility).

As we dig deeper, we believe there’s a pretty distinct separation among the different groups of dividend-paying stocks. In broad terms, we think it’s appropriate to separate them into two buckets.

The first group of dividend-payers tend to be slowly growing, stable businesses that are primarily viewed as alternative sources of “safe” income. The Telecom and Utility sectors, cited above for their strong performance year to date in 2016, offer a useful example for us to look at. Companies in these sectors have historically returned 60% to 80% of their net income to investors as dividends, compared to a longterm average of 30% to 35% for S&P 500 companies as a whole.

Because of their ability to consistently generate excess cash, these companies can provide a steady source of income to 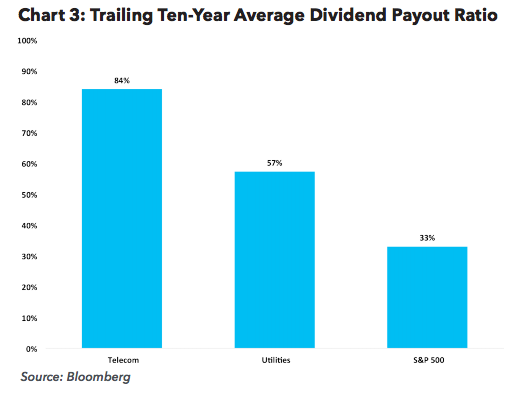 shareholders. This stability is highly sought after, particularly in the current interest rate environment. This has driven investor demand to the bond proxies in recent years. The Vanguard REIT Index, for example, has nearly $70 billion in total net assets – up from less than $10 billion in 2009. To put those numbers in context, listed equity REIT’s currently have a total market capitalization of roughly $1 trillion (this number has increased meaningfully over the past seven years, reflecting the combination of higher valuations, an improvement in business results, and an increase in the number of listed REIT’s). While the investment returns for the sector have been impressive, the majority of growth in the Vanguard REIT Index fund has been due to inflows (the same is largely true for other issuers). Outsized demand has helped drive prices higher.

We see another example in the Utility sector. A look at the historical data shows that the higher price-to-earnings (P/E) multiple applied by the market has accounted for nearly half of the cumulative gains for the Utilities index over the past five years. The multiple paid for a dollar of earnings has consistently climbed since 2009. While this is directionally correct for the equity markets as a whole, it has been particularly helpful for bond proxies like the Utility sector.

As a result of these factors, we’re generally less attracted to companies in the first group (while we’ve used Utilities, Telecoms, and REIT’s for illustrative purposes, other sectors fit here as well). Companies in the second group of dividend-paying stocks, on the other hand, are not solely viewed as yield plays.

These companies are viewed and valued in the market relative to their business prospects; factors like earnings growth and financial strength are primary considerations.

These companies tend to return a lower percentage of their net income to shareholders as dividends, with the expectation that they can grow profits – and ultimately, capital returns to shareholders – at higher rates long-term. As opposed to an overwhelming focus on the current dividend yield, where the first bucket holds a clear advantage, these companies are reinvesting to fuel future growth.

The appeal of income leads some investors to disproportionately focus on current yields, an approach that fails to appreciate the full picture. Thorough analysis requires an understanding of the dynamics that enable a company to consistently return a large percentage of its profits to investors while simultaneously defending or improving its competitive position. While the numbers cannot always be taken at face value, growing dividends over a period of many years often provides meaningful insight into the competitive dynamics of the business. It’s a useful signal for investors.

But dividend yield is not where we start our work. Our first filters when evaluating potential investments are business quality and financial strength. We are not interested in securities with above average yields that are attached to dated business models, stretched balance sheets, or both. In addition, dividends are not the holy grail of investing. If a company has attractive investment opportunities, dividends are ill-advised. In this scenario, long-term shareholders would be better served if management retained excess cash for reinvestment back into the business. It’s worthwhile to forgo the bird in the hand when you’re quite certain that there will ultimately be two or more birds in the bush (and that’s before considering the material benefit to taxable investors when they’re able to delay payments to Uncle Sam for years – or even decades).

Focusing on the current dividend yield in a vacuum misses the forest for the trees. Total shareholder return (dividends plus capital appreciation) is the metric that matters most. When measured over long periods of time, outsized returns are likely to accrue to high-quality businesses with sustainable competitive advantages. As long as management makes intelligent capital allocation decisions – which may or may not include dividends – long-term investors will be happy with the result.